While Mark was sorting out the coolant system and pipes, I took on the task of making the dash. We are making this dash to suit our standard Hawk Loom. All of our gauges are Smiths Cobra with a mechanical oil, water temperature gauges and a mechanical oil pressure gauge. We’d already cut out the area for the steering column a while ago, so I initially got to work cutting out the remaining holes for the dials. At this stage the plan is to make an IVA compliant dash. 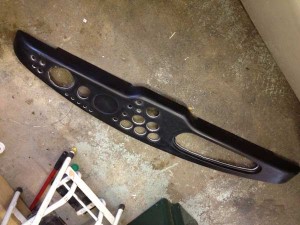 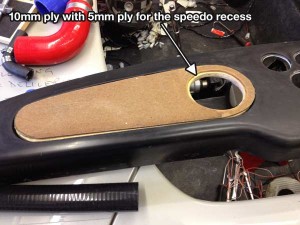 We phoned Gerry again just to double check the position of the gauges. We decided to fit the tacho right of the steering column and the speedo in the glove compartment area. This it for the IVA test as the normal location for the speedo will be obscured by the steering wheel spokes, and fail the test. For the smaller gauges in the triangle, Top row – Water temp, Oil temp, Oil pressure – middle row Volt, Fuel meter and at the bottom the clock.

To relocate the speedo, I made a pattern of the glove box opening and cut some 10mm ply and a second piece with a bigger hole from 5mm to make a recessed for the speedo. We then screwed this in place from behind and secured in place using gaffer tape on the front and behind.

I then covered the dash with leather cloth we had sourced from a company on the internet. We ordered a 2 meter roll so have loads left over. We used spray mount glue to stick the cloth down and then secured on the rear side using more gaffer tape. This of course is a temporary measure for the IVA test, as the plan is to get the dash covered properly once the IVA is out of the way and we can move the speedo to the position behind the steering wheel. 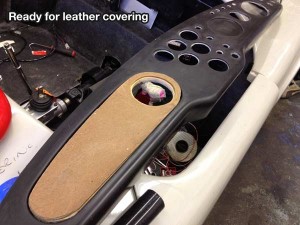 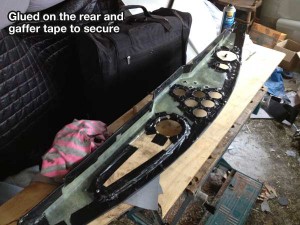 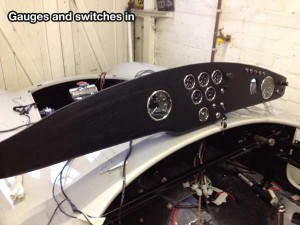 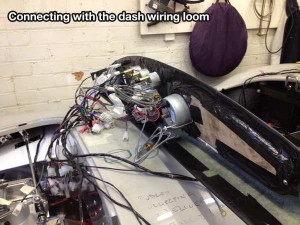